Review Come September, a version of the Sansa Clip with revised firmware will hit the streets in the UK, giving us an excuse to rustle one up and have a retrospective shoofty.

Much of the revised firmware is actually already available from SanDisk, including support for Ogg files, but come September all new Clips will also support Flac and come with FM radios as standard. 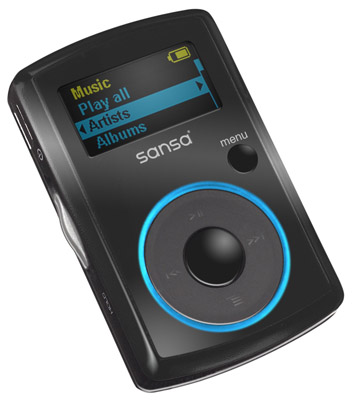 An entry level player with a decent amount of functionality

Currently you can get a Clip either with or without the radio, but the transfer of Sansa's manufacturing centre to the Czech Republic from the Fast East has sidestepped the EU tax on FM equipped kit. We are assuming this means that Clips with radios will then cost the same as Clips currently without.

Lacking official specs for the Clip our trusty Register ruler made it 34 x 54 x 10mm in size and we'd say it weighs about as much as a half empty box of matches or 25g...ish. Build wise its a little on the plastic side, but it doesn't creak, flex or groan no matter how you abuse it.

For an entry level micro-player Sansa have bundled a decent amount of functionality into the Clip so as well as support for the usual MP3, WMA, WAV and Audible formats you also get a voice recorder, an FM radio and a handy “sleep” function that powers the device down after anything from 10 to 120 minutes of play. You also get an on-the-hoof playlist facility, just hold down the centre button and the playing track is added to the GoList.