If you’re considering a Casio for your next compact camera, then it’ll be slim pickings. But not in a negative way, because the firm’s latest snapper is supposedly the world’s thinnest shooter available. 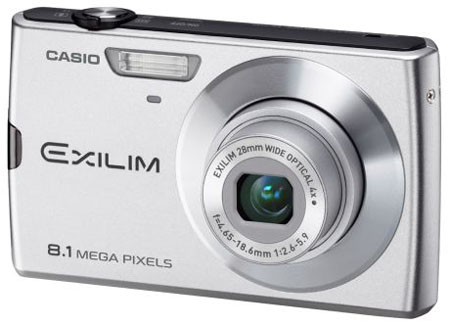 The Exilim range has always been famed for its slim casings, but the new EX-Z150 measures just 18.9mm at its thinnest point - 20.1mm at the thickest. Not very thin, you might think, and you'd be right. A glance at Casio's small print reveals that the EX-Z150 isn't the thinnest camera ever, just the thinnest compact available with both a 28mm wide-angle lens and a 4x optical zoom.

But combine this measurement with the available body colours – which include red, pink and green - and you’ve got yourself a suitably stylish snapper to match your skinny jeans.

The EX-Z150 isn’t just about looks though, as the camera boasts up to 8.1 megapixels of image grabbing capacity. The wide-angle lens should also help capture more of your friends into a single shot. Perfectly composed pictures can then be viewed on the camera’s 3in LCD.

Casio’s also equipped the EX-Z150 with standard image features, including anti-shake and face detection. Smile detection isn’t mentioned, but the highest ISO available is a reasonable 1600.

Movies can be shot at a resolution of up to 640 x 480 pixels, with a frame rate of up to 30f/s. Films and snaps are stored onto SDHC memory cards. Just under 18MB of built-in Flash memory’s available too, which Casio claims is enough for between three and ten still shots - depending on your chosen image setting.

Users have 22 pre-set image modes to choose from and YouTube capture mode for videos, which Casio introduced last year, is also included.

An official release date or price hasn’t been given yet.