No PAYG 3G iPhone in UK until Christmas

The Carphone Warehouse has announced that pay-as-you-go 3G iPhones will be available "in time for Christmas" - a rather longer wait than hopeful buyers were anticipating. 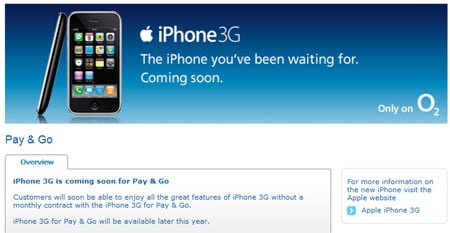 CW released a bland statement today letting punters know that it’s started taking orders for the phone – if you’re willing to sign onto an O2 contract. However, a paragraph within the statement said: “The iPhone 3G will also be available on pay as you go at The Carphone Warehouse in time for the Christmas period.”

The retailer’s yet to confirm how much a PAYG 3G iPhone will set you back, but it has promised to publicise the details “closer to the time”.

Meanwhile, O2 has posted a message onto the PAYG iPhone section of its website stating that the “iPhone 3G for Pay & Go will be available later this year”.

CW's statement ties in with a story published by Register Hardware early in June reporting after reader was told by an O2 staffer not to expect the handset until Christmas.

O2’s yet to officially state how much the PAYG 3G iPhone will cost. But unconfirmed reports have already claimed that O2 will price it at about £300 for the 8GB model and £360 for the 16GB model. Others have said the price will be higher still.

US carrier AT&T has AT&T has already confirmed that a contract-free 8GB 3G iPhone will cost $599 (£301/€382) - exactly what the first version was priced at when it went on sale a year or so ago.