A study at the Karolinska Institute in Stockholm has provided strong evidence that sexuality is a biologically fixed trait demonstrated in physical brain differences, New Scientist reports.

Specifically, key brain structures in homosexuals which govern "mood, anxiety and aggressiveness" resemble those in heterosexuals of the opposite sex - something likely to have been "forged" in the womb and not the result of later learning processes.

Ivanka Savic and Per Lindström chose to probe these specific brain parameters to avoid the pitfalls of previous studies which, while demonstrating "differences in brain architecture and activity" between gays and straights*, mostly relied on "sexuality-driven cues" which could have been "altered by learning or cognitive processes", as Savic put it.

Savic and Lindström put a group of 90 volunteers through the MRI scanner - 25 heterosexuals and 20 homosexuals of each gender - to determine their overall brain shape and volume. The results showed that straight chaps boasted asymmetric brains, "with the right hemisphere slightly larger", something they shared with lesbians.

The guinea pigs were then subjected to PET scans to "measure blood flow to the amygdala, part of the brain that governs fear and aggression". The resulting snaps (see below) showed how the amygdala "connected to other parts of the brain, giving clues to how this might influence behaviour". 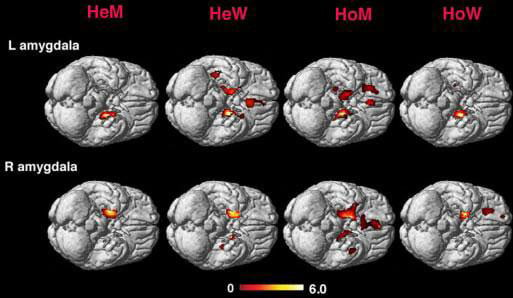 Savic described the former as "a more action-related response than in women", while noting that in the latter, "regions involved in phobia, anxiety and depression overlap with the pattern we see from the amygdala".

This is significant, Savic noted, because it "fits with data showing that women are three times as likely as men to suffer from mood disorders or depression". Savic added that while homosexual men also suffer higher rates of depression, she cautioned that "it's difficult to know whether this is down to biology, homophobia or simply feelings of being 'different'".

Qazi Rahman, a sexual orientation researcher at London's Queen Mary college, said of the findings: "This study demonstrates that homosexuals of both sexes show strong cross-sex shifts in brain symmetry. The connectivity differences reported in the amygdala are striking."

Savic concluded by admitting it remained to be seen whether the brain differences are "inherited, or result from abnormally high or low exposure in the womb to sex hormones such as testosterone". The research is published in Proceedings of the National Academy of Sciences. ®

*Such as this 1991 report (pdf) investigating differences in the gay and straight male hypothalamus.

It's official! Space travel increases the brain size of astronauts, even when they're back on Mother Earth

Wake up, Neo: Microsoft mulls using your brain waves or body heat to mine crypto-currency while viewing ads

So this is how the world ends – as a Matrix fanfic