A picture has emerged of an upcoming phone from Sony Ericsson, which is quickly becoming dubbed a gaming handset because of the talker’s integrated accelerometer. 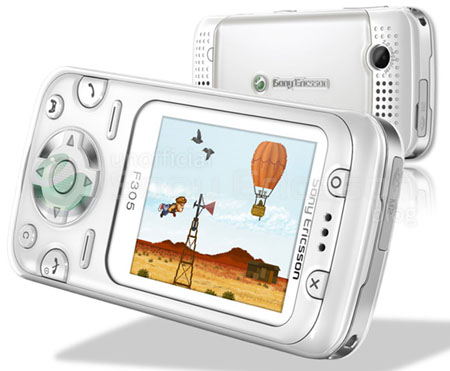 The image sprung-up in a report on the Unofficial Sony Ericsson Blog and, although the website hasn’t revealed its sources, the site has dubbed the white talker the F305.

Apparently, the phone sports several pre-loaded games, including Bowling and Bass fishing, each of which are controlled by motion-sensing technology embedded within the handset. For example, users play the Bowling game by moving the phone as though it were a real bowling ball. So, just make sure you keep a tight grip during gameplay...

The picture also shows that the F305 has a gaming menu shortcut key, which is indicated by a circular button with a PS3-esque controller image, which sits just below the phone’s 2in display.

Provided the pictures haven’t been through Photoshop, then the phone also has a slot for M2 Memory Stick data storage cards, allowing for plenty of game storage space. The blog also claims that the F305 supports Bluetooth – possibly handy for short-range wireless gaming with friends – and a USB port.

While the phone’s rear-set camera is ringed with the text “2.0 megapixels”, it’s also thought that the phone will support quad-band GSM connectivity and Edge. Users can listen to a variety of audio formats or FM radio through the phone too.

The Blog states that Sony Ericsson will unveil the F305 tomorrow - 17 June - so stay tuned for more details.