Symantec fluffs up its backup getup

The NetBackup software is kicked up to version 6.5.2 and version 6.5.3, with expanded support for Windows and VMware, respectively. But the major additions are integrated data de-duplication and continuous data protection (CDP) — both previously available only as standalone products.

"We are the only company that has integrated de-dupe to our core backup product," said Deepak Mohan, Symantec's senior veep of data protection operations.

Hmm, but didn't EMC add de-dupe and CDP to the long-in-tooth NetWorker back in October 2007 with Avamar and RecoverPoint software?

Well yes, according to Mohan. But EMC's offerings aren't really managed through the same interface in NetWorker.

Symantec is claiming a specific definition of "integrated," we suppose. And besides, said Mohan (going for the product points), Symantec's de-dupe does inline, at source, and post-processing. 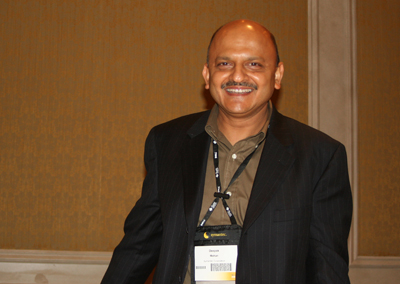 NetBackup's de-dupe comes courtesy of PureDisk 6.5. Both apps have been flirting with integration since March 2007, but this marks the first time they've been completely tied together.

PureDisk 6.5 adds more support for client-side de-dupelication, adding the Mac OS, HP-UX 11.23 and Red hat 5.0 to the client lists. It's also added support for Microsoft Exchange 2007 and on the platform side, NetApp NAS systems.

Storage capacity per server node has been doubled in PureDisk 6.5, from 4TB to 8TB useable storage.

A new arrival: RealTime 6.5 does the integrated continuous data protection business — streaming changes in mission-critical apps to dedicated storage systems as it did previously.

As for NetBackup itself — the software adds expanded support for SharePoint 2007, Exchange 2007, SQL Server, and Windows 2008.

In version 6.5.3, granular document restore has been added for SharePoint 2003 and 2007, along with granular mailbox restore for Exchange 2003.