Computex Asus may have focused its attention during the Computex show, held in Taipei this week, on its Atom-based Eee PC 901 and 1000 sub-notebooks, but that didn't stop it showing off its Eee Box desktop.

Chinese-language site HKEPC was there to take a few snaps, like these: 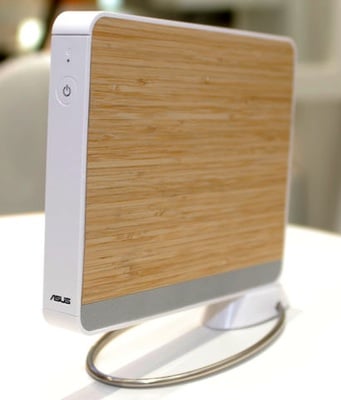 The desktop machine contains 1GB of DDR 2 memory and an 80GB hard drive, all linked up by Intel's 945GSE integrated chipset. Gigabit Ethernet is included as is 802.11n Wi-Fi - there's an external antenna that fits onto a special port on the back of the unit.

There's another port below it - the power connector's near the base - that some reports maintain is a TV tuner link. It isn't: it's the power port. The one at the bottom is an SPDif digital optical connector.

There's said to be a multi-format card reader on board, presumably under a flap on the front, where you should also find two more USB ports and 3.5mm analog audio sockets.

Unlike the Eee PC, the Eee Box has a DVI port round the back, rather than VGA, alongside two USB ports. Some models will have Bluetooth on board, Asus said. Expect a range of colours too.