Unless you're desperate for Vista and/or tablet operation, it's hard too see what the extra £370 you'd pay for the S37B really brings you.

Well, it certainly gets 20m more battery life, as we've seen, and some extra performance too. Our PCMark05 tests show the S37B beating both the Eee PC 701 and the Maxdata Belinia s.book. But then the 701's processor runs at 630MHz - we can't see the Eee PC 900's 900MHz CPU being left behind by the S37B, though we won't know for sure we can test the new Asus machine with Windows XP. 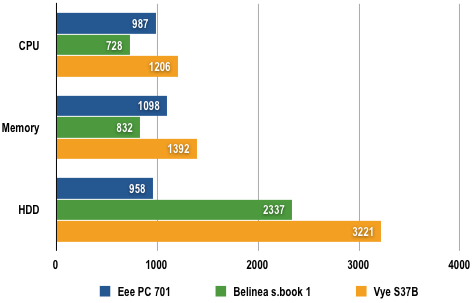 For the record, the S37B scored a paltry 97.5 in 3DMark06 - PCMark05's graphics test wouldn't complete, as it wouldn't for the other machines, which is why there's no score on the graph.

If all you need is a spare notebook for email, internet and some basic office applications then a cheaper model such as the Asus will suit your needs adequately, but if you have the budget and you're looking for a more fully featured device, particularly in terms of battery life and the tablet functionality, then Vye's mini-V is definitely worth checking out.

Not a bad bit of ultra-portable PC kit - but the Asus Eee PC 900 is half the price.
Price: £700 RRP
More Info: The mini-v S37B page on Vye's website
Page:
Tips and corrections
12 Comments