'Please ignore the cash machine behind the curtain'

But let's say an advertiser knows his stuff. Let's say he sidesteps the pitfalls of the content network, broad matches, and other "features" Google automatically turns on. This advertiser still faces another hurdle - one that even the cleverest marketers can't overcome without forking over some serious dough. 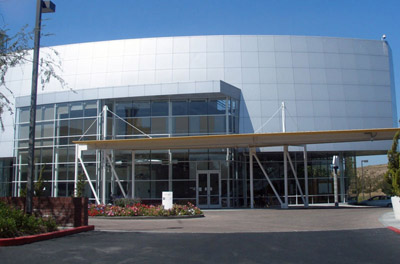 The closed doors of the Googleplex

AdWords isn't like eBay, where the highest bidder always wins. With the AdWords auction, each bid is multiplied by something called a "quality score" - which varies from advertiser to advertiser, and from keyword to keyword - and it's this calculation that determines who places high on the page and who places low. On each keyword search, the auction winner gets the top ad spot on the page. The second place finisher gets the next spot. And so on. Naturally, the higher an ad is placed, the more likely it is to get a click.

The rub is that Google won't tell the world what goes into "quality score." "Quality Score," the company told us, "is determined by your keyword's click-through rate (CTR) on Google, relevance of ad text, historical keyword performance, the quality of your ad's landing page, and other relevancy factors."

The "other relevancy factors" bit means that Google reserves the right to do whatever it wants. This is how the company weeds out so-called bad actors. But it also means that many small advertisers are forced to pay a premium just to get into the game.

On any given keyword auction, Google also gives every advertiser a separate "minimum bid." For one advertiser, the minimum bid might be 30 cents. For another, it might be $5. And this minimum bid is a function of quality score.

An advertiser can't even join the auction unless they bid their minimum. And even if their minimum is $5 higher than the competition's, they can still drop to the bottom of the page - or off the page entirely and onto the next.

That may sound like a paradox - but it's the way things work.

The Score on Quality Score

Again, this is a problem that typically hits small advertisers. The big players - companies likely to spend large amounts of money anyway - typically get help with their quality score. "Large advertisers and large accounts get preferential treatment, just because of the way the system works," Audette says. "If I'm Mercedes Benz, I'm going to get great treatment from the beginning. I'm going to get dedicated account reps, hand-holding through the entire process, and much higher quality scores - right out of the gate.

"But if I'm a small account, say a Mercedes Benz dealership in LA or something, I won't necessarily get an account rep right from moment one. I'll get quality scores that won't default automatically to a green light in terms of getting good placement. I'll have to work my way through the system and know how to play the game. And if I don't know that, then I may not have a favorable experience."

Audette points out that all advertisers are entitled to a free account "optimization." But he also says that most are unaware of this.

"Google can obviously earn a lot more revenue if they convince advertisers that there's something wrong with them and they need to bid large amounts of money per click."

Yes, Google has good reasons for putting this minimum bid in place, but it's still a plus for the company's revenues. It not only allows Google to scrape extra revenue from inexperienced advertisers. It allows Google to control who has access to the market and who doesn't.

"We can understand the reasons for bad quality scores and high minimum bids in certain situations," says Andrew Goodman. "Obviously, there might be cases where you deserve a low quality score because you have low click through rates. Or you're guilty of web site violations of some sort.

"But Google can obviously earn a lot more revenue if they convince advertisers that there's something wrong with them and they need to bid large amounts of money per click. And there may be cases where they're cracking down on business models that conflict with Google." In other words, if Google thinks someone is competing with them, they can cut them out of the equation.

Next page: Turning the Knob
Page:
Tips and corrections
58 Comments