The Vardia RD-A301 uses an HD transcoder to convert HD broadcasts from their native MPEG 2 format into MPEG 4 AVC. Toshiba claims its transcoder compresses the HD video enough for it to be burnt onto a 4.7GB DVD-R – whilst retaining the broadcast picture quality. 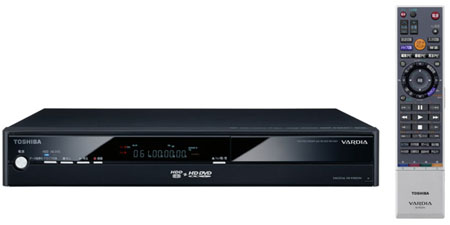 Toshiba said that two hours of HD video could be recorded onto a single-layer DVD - a 15-minute job using the Vardia's 8x burner.

Unfortunately, because the likes of Sky have most HD broadcasts, including BBC content, tied to its own DVR devices, using the RD-A301 in the UK could be tricky.

The RD-A301’s single HDMI output port supports HD resolutions up to and including 1080i.

Its probably no coincidence that Toshiba’s also throwing in a free HD DVD copy of Transformers too, because the film’s distributor Paramount Home Entertainment recently hailed the movie as an HD DVD sales phenomenon.

The Vardia RD-A301 will be available in Japan from the middle of December, but a price hasn’t been released yet. Its not known if the device will appear in Europe.