The higher peaks of the Greenland icesheet spent longer melting this summer than any summer since 1988, according to a NASA funded study. The research revealed that enough snow melted in Greenland this year to cover the surface of the USA more than two times over*. 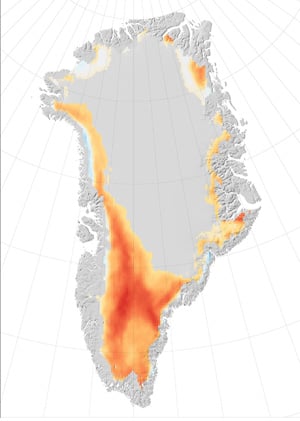 "When snow melts at those high altitudes and then refreezes, it can absorb up to four times more energy than fresh, unthawed snow," said Marco Tedesco, a research scientists at the Joint Centre for Earth Systems Technology.

"This can affect Earth's energy budget by changing how much radiation from the sun is absorbed by the Earth versus that reflected back into the atmosphere. Refrozen snow can also alter the snow density, thickness and snow-water content."

Tedesco said the results came as something of a surprise, and demonstrated just how complex the environmental systems of our planet are.

Overall, the time spent melting in Greenland this year was up 30 per cent on the average for the last two decades. This isn't a record peak, but could be indicative of a trend towards longer periods of melting in the region.

Tedesco noted: "Aside from contributing to direct sea level rise, melting especially along the coast can speed up glaciers since the meltwater acts like a lubricant between the frozen surface and the bedrock deep below. The faster glaciers flow, the more water enters the ocean and potentially impacts sea level rise." ®

Click here for a larger version of the picture, with appropriate scale.

*What this is in sheepsecs/multiples of Wales is left as an exercise for the reader.