But, as we've seen, that kind of ostentation is available to any techie or sports nerd now. So what can the superwealthy buy these days that would really set them apart and show a combination of wealth and unnecessary but pleasing capability?

There is of course the option of more and bigger houses, nuclear bunkers, hollowed out volcano lairs etc. But these are relatively poor in technology, so we're going to forget that idea. Besides, it's difficult to really impress people with your home if it's hidden in a massive deer park, up a mountain, atop a skyscraper or whatever. No – we need something that can move about. Cars are no good, of course; they use roads, and that means possibly having to wait for other people. Plus, they simply aren't expensive enough. The same goes for ordinary-type seven-figure aircraft.

It was widely reported during this year's Paris Air Show that an unidentified individual has ordered one of the new Airbus A380 double-decker superjumbo jets as his personal plane. That's pretty showy. The A380 offers 10,000 square feet of floor space, about the size of a fairly posh golf clubhouse in total, or a small mansion. It's significantly bigger than Air Force One, and at least theoretically offers enough space to have the basics: Smallish cinema, grand piano, snooker table, squash court etc. There's also plenty of room for a large retinue of rent-a-lovelies, ex-special-forces close protection thugs, bum-lickers, accountants and other hangers-on.

But the A380 is very limited in which airports it can operate from, and that means inconvenience and hassle. How are you going to get from some dive like Heathrow or Frankfurt to your palace in Bavaria or your Scottish castle? The A380 could carry an armoured limo or two, or a small helicopter at a pinch with its rotors folded, but big planes of this type don't unload very quickly. There probably won't be enough rides for all the hangers-on. Even you yourself could be looking at airport delays, maybe traffic jams, or onward connections in rented transport – just like some sort of lowly business-class peasant.

The US President gets around this by having a monster C-5 military transport accompany Air Force One with the necessary choppers, cars etc; but now we've got landing-slot problems to boot. And overall, the whole personal-airliner thing lacks class and originality. It's all rather 1980s, a bit too oil-sheikhy and lacking in sufficient dot-com nerdwealth tech pleasingness. The personal A380 isn't different or clever: just big.

Now we're getting somewhere. Admittedly seagoing yachts are slow – think weeks rather than hours to get places – but they can put in and out of harbours worldwide, usually without any immigration or customs hassle to speak of. They're big enough for proper-size cinemas, pools, jacuzzis, ballrooms, libraries, atria with glass lifts, wine cellars and what have you. 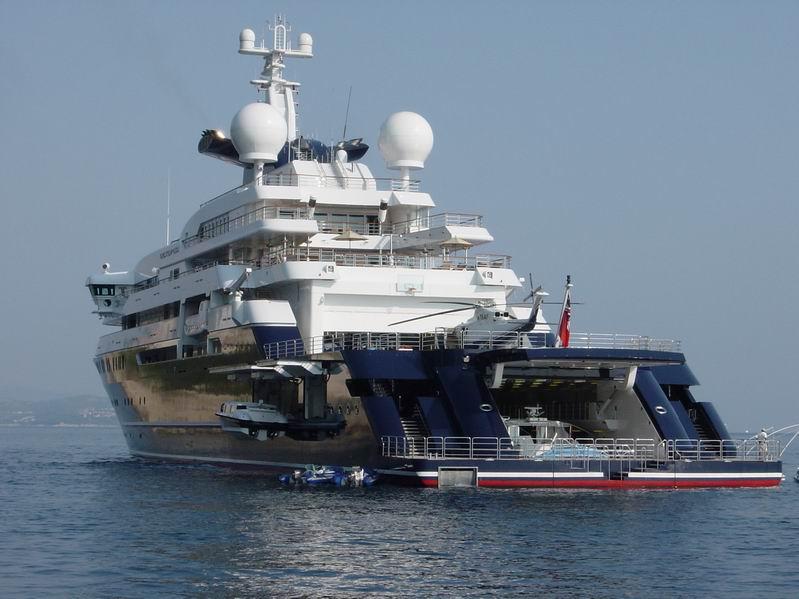 Nowadays, too, a lot of megayachts have options for cool toys and accessories. An example is Microsoft founder Paul Allen's Octopus, with a flooding boat bay able to deploy large tenders and a submarine from the stern dock, or jetskis and speedboats from side doors. The tricky problem of arguments with the wife over the helicopter is solved by having hangar space for two with pads forward and aft, and in a homey touch there's a basketball hoop mounted above the helicopter garage door.

Allen is one of the relatively few super-rich with enough adventurousness to stray beyond jets, choppers and surface craft. Details of the Octopus submarine are restricted by a non-disclosure agreement, but it's nonetheless a fairly open secret that the sub is the former Olympic Submarine Technologies' 40-foot design – one of very few serious, capable private luxury submarines in existence. Allen's sub is reportedly rated for 300m depths or more and can carry ten people. It's supposed to have cost £6m – a snip compared to the mothership.

Other megayachts are said to deploy subs: but it's seldom that these are serious, one-atmosphere pressure-hull jobs like Allen's, able to dive deep. They're more usually remotely-piloted jobs used mainly for underwater security checks in harbour. Rumour has it that the justifiably paranoid Russian billionaire Roman Abramovich likes this kind of kit on his yachts.