The European Space Agency's (ESA) next big project is a step closer to being launch-ready, as scientists in Germany complete the "mating" of Herschel's two most fundamental modules, the cryostat and the service module. 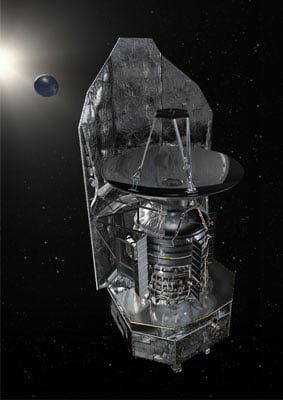 Artist's impression of the observatory out in space.

Herschel is an infrared space observatory, scheduled for launch at the end of July 2008. It will carry the largest telescope ever flown in space tuned to study the formation and evolution of stars and galaxies at very long, infrared wavelengths.

ESA scientists hope to use the observatory to find star forming regions, galactic centres, and even to take a closer look at distant planetary systems.

The cryostat will maintain a very low temperature inside the telescope - necessary to protect the sensitive instruments in the harsh and extremely variable space environment. Most of the instruments will be carried inside this section, which the mission planners refer to as the brain of the mission.

The cryostat will be filled with super-fluid helium, which clocks in at just two degrees above absolute zero. There is a further cooling stage in the focal plane units, ESA says, which keeps the instruments at just a third of a degree above absolute zero.

Meanwhile, the rest of the craft is kept relatively warm. The parts of the instruments that don't need to be super chilled, along with all the rest of the equipment for the day to day running of a space observatory, are in the so-called heart of the craft: the service module.

Now that the warm and cold sections have been joined, the almost-completed observatory will go to Astrium and then to ESA's European Space Research and Technology Centre for functional, compatibility, and environmental testing. Provided it aces all of that, it will be combined with the telescope and solar arrays before heading to French Guiana for its launch.

The craft will be blasted into space aboard an Ariane 5 ECA launch vehicle. The rocket will also be carrying ESA's Planck mission, which aims to study relic radiation from the big bang. ®