Accessory specialist Gear4 has created two audio systems with chic appeal. The BlackBox and BlackBox Mini would both sit well in a Tate Modern exhibition, but could also provide you with some decent audio too. 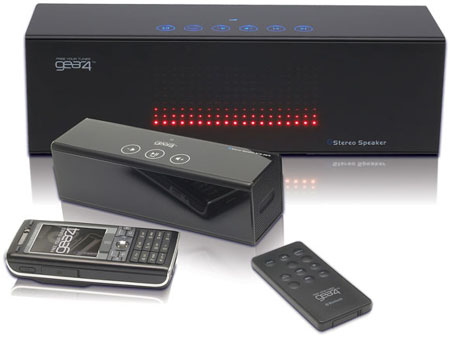 BlackBox is the house-bound daddy of the two, while the Mini is essentially a portable and smaller version of it. The asthetics of both units will quickly grab your attention, as they look a little out of this world, thanks in part to their hidden LED displays, touch-sensitive controls and front mounted displays that come to life when users approach.

Two speakers are built into the BlackBox, which helps it pump out a maximum of 24W, so it won't replace your main stereo, but it's good enough for a small house party and is in league with TwinMos' Boom 1 2.1-channel iPod audio system. The Mini is much the same, although it's audio qualities aren't stated, but it comes with a carry case because it's designed to accompany you to the beach, on road trips or generally anywhere you might need portable and decent quality music.

Both systems have line-in jacks for connecting up to various external audio systems, such as CD or MP3 players, or even a laptop. However, Bluetooth is the preferred connectivity medium and both are compatible with A2DP, for streaming music from a mobile phone, and can handle transmissions from portable media devices that directly connect over Bluetooth. Both models also have a mini USB port, which could be used to both charge your MP3 player and to play music through.