But the war continues...

GfK numbers were also used by the BD camp to claim so far in 2007 among Europe's six biggest economies, 94 per cent of devices capable of playing next-gen optical media were compatible with BD, to just six per cent for HD DVD. 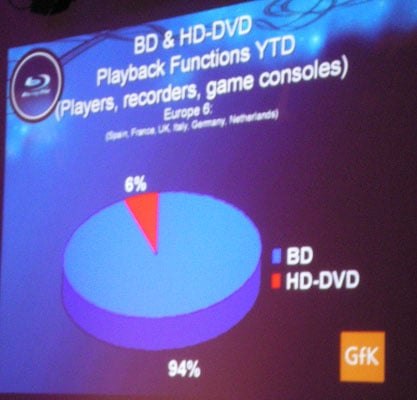 The BD supporters also pointed to Sony's claim to have shipped 1.3m PS3s in Europe during 2007. Since the vast majority of those are PS3s, that previously mentioned 94 per cent is a little over 1.3m units. Do the sums, and the equivalent figure for HD DVD device sales is just under 83,000 units.

That's roughly 982,000 high-definition discs in total sold in Europe in 2007, giving BD around 66 per cent of the media market here. Sony and co. claimed 70 per cent - no so far from the result of our back-of-an-envelope calculations.

The pinch-of-salt factor here is that we're not using precise numbers. But they are based on third-party market stats, and given an indication where the market is going. And, for now, the numbers point to Blu-ray.

That may change: the arrival of a cut-price HD DVD player in Europe, and Toshiba's continued drive to offer HD DVD players with lower price tags that equivalent Blu-ray Disc hardware, could give the format a fillip, particularly in the run-up to Christmas. But Sony is still going to sell plenty of PS3s in the same period.

Nasty firmware update butchers Samsung smart TVs so bad, they have to be repaired

On the plus side, at least they didn't explode

Onto the format fence?