So, what's the velocity of a sheep in a vacuum?

Plus, the size of Wales in cubic furlongs 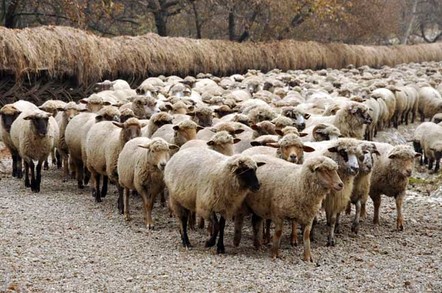 In a recent piece on red-giant star Mira, we rather foolishly suggested that the "comet-tailed" body was travelling across the heavens at roughly 150,000 times the speed of the average sheep.

Accordingly, the Vulture Central Weights and Measures Soviet immediately set out to define once-and-for-all a set of agreed standards to which all future quantities would be subject.

Here, then, are the results:

For volumes lesser or greater than 1gf, the following should be used:

For greater than 1lg, the following should be used:

The distance travelled by a tantrum-driven flying PDA shall be defined in Campbells (1cB=231lg). Example: "Yeah, I asked that Foxy Brown to turn her car stereo down and she only went and threw her bleedin' Blackberry about three Campbells."

The standard unit of area shall be the nanoWales, defined as 1nWa, representing 0.0000207km2 or 20.78m2, 5.195 Thai talang wah or 28.99 Old Spanish square vara. The microWales, milliWales and Wales (Wa) are, naturally, accepted multiples of the base nanoWales.

Velocity of sheep in a vacuum

The theoretical maximum velocity of a sheep in a vacuum is expressed in sheepsecs (Ssx), calculated as follows:

Speed of light (c) divided by wooldrag (Wd) + Welshmen (Wm), where wooldrag is a species-defined drag coefficient determined by the length and pliability of the fleece and Welshmen is the number of locals who have turned up in their wellies, and are hanging on for dear life.

Wooldrags have recently been calculated by researchers at CERN, and the latest experiments shed some light on the phenomenon, but it is still mysterious. The effect is similar to friction here on Earth, but is due to the interaction of the wool and fluctuations in the quantum vacuum. Researchers have applied to the EU for further funding, but it has been put on hold as a result of the recent outbreak of foot and mouth disease.

Alternatively, a newly-clipped Finnish Landrace, with a wooldrag of 23, worried by just one Welshman has a theoretical Ssx of c/(23+1), or 12,491 km/sec.

Clearly, the difference in these two results means that a compromise standard is required. The El Reg Ssx uses the classic Cheviot as its sheep of choice, with a wooldrag of 50. Wm is in this case 0, since everyone knows that Welshmen do not in fact have intimate relations with sheep and any reference to the same is just a cheap attempt to drum up laughs.

Theoretical versus practical limits of sheep in a vacuum

There are, of course, some tricky real-world problems that interfere with smooth calculations of the speed of a sheep in a vacuum. So far we have assumed that the sheep is a perfect sphere (roughly equivalent to 20 footballs, or 220gf). In a perfect vacuum, this isn't a problem, but when you factor in the notoriously sticky interstellar medium and large, the assumption simply will not do.

The interstellar medium and large is, according to research, roughly as dense as the grey matter of the average Hollywood celebutant.

Assuming one super-sticky particle per cubic metre (or one brain cell per three starlets - don't ask us to guess which of them is currently using it), the interstellar medium and large exerts a drag on the average sheep equivalent to half a slightly scary Welshman. Thus, we can calculate the maximum real world velocity of a sheep in space:

And the size of Wales in cubic furlongs?

This is a tricky one. The political debate behind it is long and uninteresting, so we will skip it and report only that it has been determined that the volume of Wales has been defined as including all topsoil, land and equipment, up to, but not beyond, one metre below the surface.

This means everything below ground (coal) is English, while the Welsh can retain their cherished national symbol, the leek.

One thought equivalent to less than a single proton in mass

How many Routemaster bus seats would it take to fill Wembley Stadium?