Whole Foods CEO went after rival as a message board troll

'I never intended those postings to be identified with me. Gosh, I'm cute' 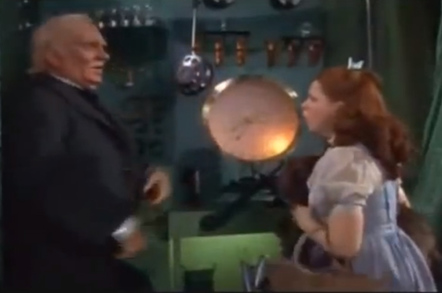 Using the pseudonym Rahodeb (a variation of Deborah, his wife's name), Mackey posted on Yahoo! Finance's bulletin board over an eight year period, claiming to be a huge fan of Whole Foods and sparring no barb for its rival, Wild Oats Market.

"The writing is on the wall. The end game is now underway for OATS," Rahodeb wrote on the forum in March. (OATS is the ticker symbol for Wild Oats.) "Whole Foods is systematically destroying their viability as a business — market by market, city by city. Bankruptcy remains a distinct possibility for OATS IMO if the business isn't sold within the next few years."

Mackey's internet exploits were revealed by a Federal Trade Commission antitrust lawsuit seeking to block the sale of Wild Oats. The story was first caught by the sharp eyes of The Wall Street Journal. A court document (warning, PDF) made public today included a quote from the Yahoo forum and a footnote that claimed Mackey often posted to internet sites using the screen name Rahodeb.

"The only thing time has told us about OATS is that it has lost $81 million in 19 years and $33 million over the last three years," wrote Mackey on the forum in February '05. "...The stock is up on takeover speculation and nothing else. The company still stinks and remains grossly overvalued based on very weak fundamentals. The stock is up now, but if it doesn't get sold in the next year or so it is going to plummet back down. Wait and see."

"You're also right that I have no shame," he continued. "Why should I?"

Mackey has confirmed his internet alias on his Whole Foods blog, and said the FTC quoted his internet persona in court documents to embarrass him and the company. The blog continues that he made the forum postings because he "had fun doing it," and "never intended any of those posting to be identified with me."

"The views articulated by Rahodeb sometimes represent what I actually believed and sometimes they didn't. Sometimes I simply played 'devil's advocate' for the sheer fun of arguing."

Rahodeb was also quick to staunchly defend his true persona. Some gems from the board:

"While I'm not a 'Mackey groupie,' I do admire what the man has accomplished."

When a forum member insulted Mackey's haircut in a Wall Street Journal mugshot:

“I like Mackey’s haircut. I think he looks cute!”

Rahodeb's last post on the forum was on Aug. 12, 2006. Apparently, he had lost a bet with another poster about Whole Food's quarterly earnings on the terms that he would leave the forum.

"Whole Foods itself has a very bright future and I will continue to hold my stock for a very long time — until the growth begins to significantly slow."

At least two forummers appeared to be on to him. He ends with this note:

"Surgeon General and Boston Cowboy — you were both right about my true identity all along. Congratulations on your cleverness. Take care everyone. Goodbye."

+Comment Cofounder boss Trevor Smith off 'to pursue other opportunities'