Aside from the chirpy awfulness of this Cliff Richard-esque nonsense, there is a rather more significant reason why the campaign is doomed. Ask.com is making a fundamental mistake about what makes the web an efficient medium for information exchange: it is a network containing centralised nodes where they are necessary, and not where they aren't. Google is one of the centralised nodes. It works well because it is a monopoly, not in spite of being one. 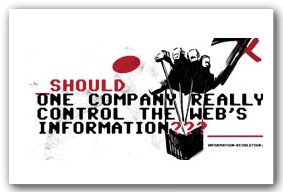 The sheer diversity and scale of the web means that if quasi-monopolistic intermediary websites did not exist, we would almost certainly have to invent them. In the minds of most web users, eBay is now synonymous with online auctioning, Amazon with online retailing, and Google with searching. The choice that consumers want lies in the goods and information they access via these intermediaries, not in the intermediaries themselves.

There are two legitimate concerns about this. The first is economic: how can we be sure that these private monopolies will maximise consumer welfare? The answer is that we can't, which potentially introduces a role for competition authorities. But, at least in a European context, the sin committed by monopolies is not "dominance" but "abuse of dominance". As long as companies like Google are reinvesting their profits (which admittedly they struggle to, given their size) and providing good quality search results, then the monopoly is not deemed a problem.

Where monopoly becomes actually beneficial to consumers is where there are network effects involved resulting from the presence of other users. This has always been the case with marketplaces such as eBay. The reason we buy and sell at eBay is the same reason traders do so on Wall Street – that's where all the other users are.

There may not be such direct network effects relating to Google's size, but there is an accumulation of trust and quality. The more users Google gains, the more money it makes on the margins, and the greater financial stake it has in the integrity of its service. This is an economic fact, not an ethical defence. 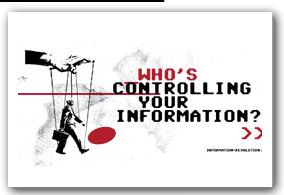 The second concern is political, and this is where perhaps we could take Ask.com at their word. How should we feel about having so much of the world's information channelled and found via a single company? What about advertising to us on the basis of our Gmail inboxes? What happens if Google suddenly abandons its "Don't be evil" ethos?

These are all valid questions. The main tool we have to appease such concerns is data protection legislation. Perhaps we need to supplement this with an independent government regulator for search engines, as Bill Thompson has argued in the past. Equally, it would be nice if search engines entered an arms race in consumer ethics, each trying to out-do the other in the transparency of its data management.

Sadly, all of this is rather beside the point. Data protection and privacy laws are of very limited appeal to the broader public, a search engine regulator is only plausible once some scandalous melt-down in data handling has occurred, and if ethical terms and conditions were really a selling point for a search engine then undoubtedly Ask.com would have focused on that for its "information revolution". But it's not and they didn't.

Which brings us back to where we started. Oscar Wilde famously wrote that "the problem with socialism is that it takes up too many evenings". Ask.com's "Information Revolution" faces a similar problem. Trying to mobilise people to do something which isn't convenient and won't directly benefit them is hard at the best of times. When you're trying to do so in order to prop up your bottom line, you deserve the utmost failure. ®

William Davies is a sociologist and policy analyst. His blog is here. ®

Give nerds their own PRIVATE TRAIN CARRIAGES, say boffins

The Thinkfluencers' Express will depart from platform 94 5/4...

Defeating opsec with a rock

Australian mine train capable of hauling 236 carriages and 29,500 tonnes goes 100km without anyone aboard

UK is first class for train Wi-Fi in Europe

Indonesian train roof fare-dodgers given the brush off

This 125mph train is fitted with LASERS. Sadly no sharks, though

Japan gets to grips with train-grope websites