One thing to fuel them all...

Review The temperamental English weather makes testing a portable solar charger like the Freeloader a tad difficult. Luckily, we were able to grab a day or two of glorious sunshine before the heavens opened and the onslaught of April showers began... in May. Yup, it's all change up there in the atmosphere and as the world warms up, you may be grateful for little devices like this one. Or not, of course... 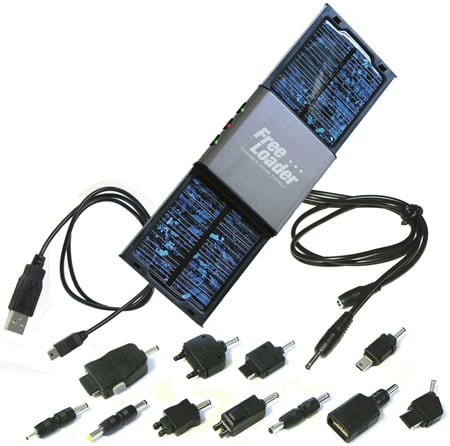 The Freeloader measures 12.3 x 6.2 x 1.7cm and weighs in at 185g. But unlike most other devices of its kind, the Freeloader itself charges up to become a separate battery ready to plug in and recharge a mobile phone, PDA or MP3 player.

The advantage of this approach is clear: the Freeloader can be left outside somewhere safe and bathed in sunlight while you go off and do your daily routine. Once charged, it's ready for use whatever the weather.

The Freeloader has two solar panels, initially placed face-to-face to keep the delicate photovoltaic cells safe. To charge the device, pull them off, separate them, then click them back onto the main body, one on either side of it. When the device is facing the sun, two LEDs located on the side light up green.

The unit can also be charged from a computer's USB port, for which a cable is supplied. Hooking up a phone or music player is quite simply a matter of connecting one of the many bundled adaptors to the Freeloader.

Something for the Weekend, Sir? Youth culture and the iron-cladding of backsides

EFF wants you to open your Wi-Fi to IMPROVE privacy

'It wasn't me officer, it was that drifter on my access point!'