Dubbed the SoundBlaster X-Fi Xtreme Audio Notebook, the add-in unit was announced today in Japan. The card has analogue and digital optical 3.5mm input and output ports, and a proprietary connector that hook up to a bundled 7.1-channel output dongle.

The card incorporates sound tweaking technology that can reconstruct audio detail lost when music is compressed using 'lossy' sound formats like MP3. Creative was recently smacked on the wrist by the UK's Advertising Standards Authority for claiming the system produces better sound quality than you get off a CD. 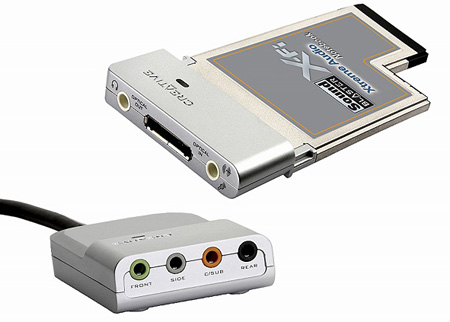 The SoundBlaster X-Fi Xtreme Audio Notebook also provides a 3D sound enhancement, capable of generating a more spacey sound even from two speakers or a pair of earphones, Creative claimed. And it'll output 7.1 sound, of course - Creative will pitch the product at punters who want to play music and movies on their living room laptop.

Thou shalt respect the Osman and keep your distance, rebels

Incredible how you can steal data via Thunderbolt once you've taken the PC apart, attached a flash programmer, rewritten the firmware...