Human error to blame for demise of Mars orbiter

Human error was the most likely cause of the loss of the Mars Global Surveyor (MGS) spacecraft. That is the conclusion of NASA's preliminary investigation into the disappearance of the craft, which lapsed into radio silence late in 2006.

The final communication with the craft was in November 2006, when mission managers signalled the craft to move its solar arrays into a new position. 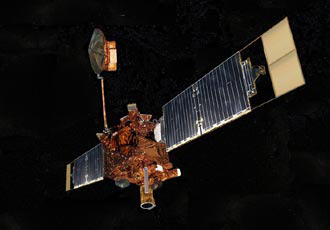 Because of an error made in a software adjustment five months earlier, this command triggered a sequence of events that culminated in the loss of the craft. NASA has now confirmed that the Surveyor was lost just 12 hours later.

The problems began in the summer of 2006, when an update to the high gain antenna's (HGA) pointing direction was written to the wrong part of the spacecraft's memory. This error unintentionally disabled the solar array positioning units and corrupted the HGA's contingency pointing direction.

All was well until 2 November when a command caused the solar arrays to "attempt to exceed their hardware constraint", as NASA puts it. The onboard fault protection system stepped in, and this left the array in "a somewhat unusual configuration".

Now, with its batteries pointing directly at the sun, the MGS began to overheat. The overheating battery was misinterpreted by software on board as being overcharged, so the MGS automatically shut down the charge current, effectively dooming the craft.

NASA has confirmed that all signals and other functions were lost within 12 hours of this signal being sent, making rescue all but impossible.

The MGS had already had its mission extended four times, so in many ways the loss of the craft is not too surprising. Nevertheless, until the craft unexpectedly dropped off the airwaves in November last year, it was still doing valuable scientific work, and it will be sorely missed.

During the course of its decade-long mission, the craft sent back almost a quarter of a million images, including those which suggested that water might have flowed on the red planet at some point in its past.

Three other craft remain in orbit around our smaller, redder neighbour: Mars Express, the Mars Reconnaissance Orbiter, and Mars Odyssey.

The full report on the errors that caused the craft's demise can be found here (pdf). You can find some of the highlights of the MGS' mission here. ®

Could be the end of the road for Opportunity, too

MAVEN and Mars Reconnaissance Orbiter had near miss last January