SXSW The likes of Amazon.com and the Gap still have plenty to learn from pornographers, starting with lesson number one – pay your associate chums well.

Many traditional retailers and even online types like Amazon hand associates who send sales their way a small percentage of the good sold as a result of a link. Pornographers, by contrast, with their massive associate networks that fixate on moving large volumes of user traffic can pay very good money. One could, for example, clear about $50 for pushing a paying customer to a sex site.

The non-porn crowd seems to view associates as a type of gravy poured over their core online business. They toss a few bones here and there to keep the masses happy.

Creating an affiliate army could be key to navigating a more competitive online world, according to the SXSW panelists.

They expect independent news and store sites to go somewhat by the wayside in the coming years with networks of sites taking control.

Mainstream types like the Wall Street Journal, Barrons and the Financial Times have tried a similar approach by uniting forces.

The staid set could also learn from the pornographers by choosing function and comfort over ultra-style with their web designs.

For example, take porn-celeb Seska Lee, who films herself swapping juice with her husband and other women and men that happen to stop by the house. 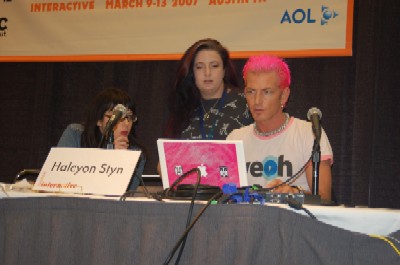 "I decided that I'm just going to (spend money and effort on) shoot(ing) content because that's what's going to sell. People connect with me because they think, 'She really made that.' If you look slick, people aren't going to connect with you."

And, of course, the pornographers agreed that the content crowd should do away with DRM (digital rights management) technology.

"Several years ago, that's all everyone in the adult industry was asking about," Styn said. "Then, they pretty much decided universally that the frustration on the consumer end and the loss of sales did not make it worth the amount of lost product sales (to theft)."

Here's us guessing the music and film industry would prefer to make life tougher on consumers and lose sales.

To Halcyon and Beyond

The entire world that is Halcyon can be found here. ®

Cisco bulks up routers for carriers struggling with CDN traffic

IOS XR gets an SDN injection to help things out, too