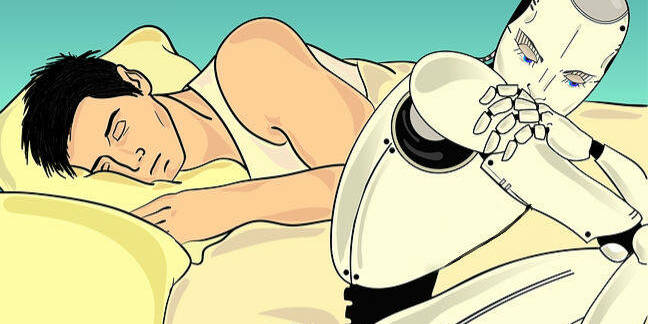 Falling asleep after sex is common, but falling, sleeping and staying asleep during sex is another matter. The condition is called sexsomnia.

Sexsomnia occurs when a person is asleep and yet proceeds to initiate sexual activity with their bedmate. Sexsomnia is also known as "somnambulistic sexual behaviour".

The first use of "sexsomnia" for this condition was by Dr C M Shapiro and two colleagues from the Sleep Alertness Clinic of the University of Toronto and the Toronto Western Hospital in a June 2003 article in the Canadian Journal of Psychiatry. Sexsomnia is described as a mix of sleepwalking and adolescent wet dreams.

According to the researchers, amazingly, not all partners of sexsomniacs are distressed or irritated by the novel experience of having an unconscious person make love to them. In fact, some seem to prefer it. The researchers describe sexsomnia as a "distinct variation" of sleepwalking.

The researchers discovered it by interviewing patients referred to their sleep clinic for normal sleep-related problems. According to the Shapiro team, "[o]nly subsequently did the issue of sexual behaviour during sleep emerge", although they noted prior cases of indecent exposure during sleep.

They add: "We anticipate that the number of potential cases is large but sexual behavioUr in sleep is not yet recognised by physicians as a behaviour of note or a problem."

There were 11 case studies, mostly male. One married man, aged 35, had sexual dreams and "enacts these by having intercourse with his wife, who is convinced he is asleep...[he] is only aware of his behaviour from his wife's reports".

Two girlfriends of another man, aged 43, "independently confirmed that he frequently engages in sexual behaviour while asleep". One describes him as a "different person" during these activities - apparently he is a more amorous and gentle lover and more orientated towards satisfying his partner.

By contrast, another man, aged 37, according to his wife is "more aggressive and more amorous. He indulges in behaviours while asleep that he does not undertake when awake...there is no stopping him. But when he once grabbed her neck, she had to slap him."

In the May 2006 Journal of Clinical Forensic Medicine, Dr I O Ebrahim of the London Sleep Centre describes a recent sexsomnia case in England "where the defendant was acquitted on three charges of rape on the basis of automatism due to somnambulistic sexual behaviour".