SC06 Warning: This story will have minimal cynicism and sarcasm. It may reveal good-natured nerds.

The scenario would horrify many of the well-funded Linux clusternistas out there. You want to teach students about the joys of high performance computing, load balancing, and parallel programming but can't afford a multi-processor box for the kiddos.

Clusters have enjoyed a dramatic dip in prices over the past few years, although they remain out of many schools' reach. A decent eight server cluster can easily stretch past $35,000 or so.

Four US college professors with a geeky bent have worked to whittle the cost of a basic cluster down to $3,000 in the hopes of putting the systems in more students' hands. They've crafted a system called LittleFe – get it – that's a six server cluster based on Via chips.

The professors – or more specifically their slave students – have spent 18 months trying to get the LittleFe design just right. The system has to remain cheap, portable and easy enough to make if it's going to reach high schools and colleges throughout the country.

The idea driving the LittleFe project is that students will show more interest in learning high-end computing if they can interact with an actual cluster.

"There's something very visceral about it," said Charlie Peck, a professor at Earlham College and one of the project's leads, in an interview here at the Supercomputing conference. "If I can make learning this stuff accessible and interesting enough, then the students may be willing to put down their Gameboys." 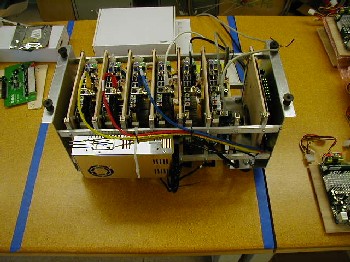 Despite being low-powered, the LittleFe cluster gives students a chance to tackle some of the higher-end computing techniques currently driving the industry. The students can learn to carve up machines, see how software runs across multiple systems, and grapple with more advanced management techniques than those they would encounter when working with a laptop, workstation or single server.

"LittleFe weighs less than 50 pounds, easily and safely travels via checked baggage on the airlines, and sets up in 10 minutes wherever there is a 110V outlet and a wall to project an image on," the group ads on its website. "By leveraging the Bootable Cluster CD project, and its associated curriculum modules, LittleFe makes it possible to have a powerful ready-to-run computational science and HPC educational platform for under $2,500."

The LittleFe effort has resonated with Jesse Bemley who runs the Joint Educational Facilities programme in Washington DC. The JEF organization looks to provide cutting edge computing systems to minority students and recently won a LittleFe cluster. Bemley said he's pretty thrilled about the idea of putting the cluster in the hands of his 10 students.

As it turns out, the LittleFe effort has caught the attention of numerous educators. Peck said the LittleFe group was bombarded with requests for systems at this year's Supercomputing show. The professors and their students are now trying to figure out how they can meet demand for all the boxes without turning into full-time server makers.

Intel has stepped in with some help by firing off a fresh supply of motherboards to crank up a more powerful generation of LittleFe boxes. Still, those behind the project are looking for even more help with both the equipment and construction of systems.

Those interested in the LittleFe project should peek here.

Companies with CEOs that complain about the US's waning technology expertise may want to take a close look at the project. Blinking lights have been known to captivate many a youngster. ®

Analysis Get the data out of memory faster

VSAN users get file access with DataSphere: It's a computing resource 3-way