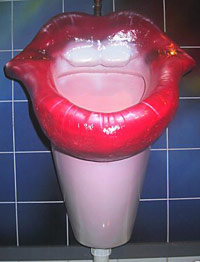 Four "sexist and misogynist" urinals have been removed from a public toilet in Vienna and offered for sale on eBay, Reuters reports.

The offending pissoirs - lovingly sculpted by local artist Rudolf Scheffel and installed in "toilet-bar Vienna", next to the National Opera - caused a bit of a rumpus during the run-up to the 1 October parliamentary elections when they were "used by political party supporters attending rallies nearby". Although the urinals had been in service for three years, this political exposure provoked women's groups to slam the offensive porcelain, which resulted in its removal.

The seller promises: "Each urinal will, of course, be meticulously cleaned. The artist himself will sandblast it, brush the mouth's teeth, and give them a new varnish."

Hurrah! Urinals will soon be splash-free