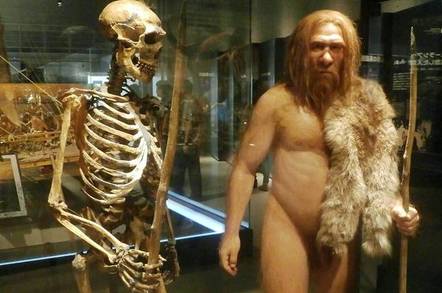 Neanderthals clung on to existence in southern Europe as recently as 24,000 years ago, research on a cave in Gibraltar has revealed today.

Carbon dating evidence from charcoal found inside Gorham's cave brings forward the timing of their extinction by almost 10,000 years. Previous studies said our closest relative probably went the way of the dodo around 33,000 years ago.

The record at Gorham's cave shows neanderthals used it repeatedly over many thousands of years. The new study dug deeper inside the cave to deposits lass likely to be contaminated.

Gorham's cave is on the eastern cliff face of the Rock. A mere 25,000 years ago Europe's climate was lurching, with glaciers and pine forests retreating north. The Atlantic would have stabilised the impact of this locally.

The Natural History Museum's top human evolution bod Professor Chris Stringer, who worked on the new study, told The Guardian: "For the neanderthals, this was a great place to be. The view would have been breathtaking, and they would have literally been able to see where their next meal was coming from. The evidence supports the idea that this was one of their last survival spots, one of their final outposts."

A cache of butchered animal bones inside suggests the community brought their kills inside, wary of scavengers like hyenas which stalked the Mediterranean coasts at the time.

Neanderthals are interpreted as a separate branch of human evolution to the one which gave rise to Homo sapiens in Africa. They probably evolved from an earlier Homo erectus population which left Africa and then became cut off.

Adapted for cold weather, they were shorter and stockier than our ancestors. Despite their brutish reputation, neanderthals actually had larger brains than us but casts of the interior of their skulls do not have the same evolutionary changes it's thought gave modern humans their cognitive edge.

Speculation on what finally did for neanderthals is a favourite topic of debate among experts. They could have been violently exterminated by advancing Homo sapiens, ravaged by our diseases, unable to adapt to the rapidly changing climate and enviroment at the time, or simply out-competed for food and other resources?

Stringer said: "This new evidence from Gibraltar supports the idea that their extinction was a long and complex process, with Neanderthals surviving after 30,000 years in some locations."

"The reasons why they disappeared from the Middle East could be different from those in, say, the Ukraine, and different again from the factors involved in Britain, Germany or Gibraltar."

The possibility some neanderthals were assimilated, interbreeding with the booming modern human population - formerly a taboo suggestion - has found favour of late. The Neanderthal genome project, begun in July this year and expected to take two years, should help answer that one. ®

Exoplanet telescope out, and Opportunity in its last rites