Sony called its system Position Plus. Essentially, it's a series of back-up sensor that provide the Nav-U's on-board computer with additional positioning data when the GPS signals aren't up to scratch - when your driving under a bridge, in a tunnel or between tall buildings, for instance. Sensors include integrated acceleration and pressure monitors to measure speed and altitude. 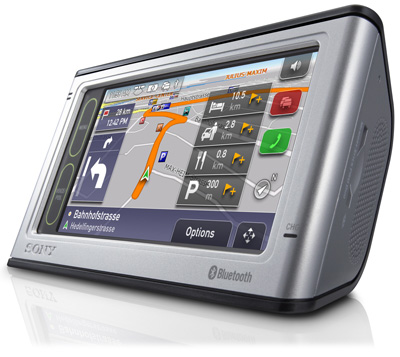 Map and route information are displayed on the NV-U80 and NV-U81T's 4.3in touch-sensitive widescreen display. Sony said it has added gesture control to the gadgets: swipe your finger over the screen in a certain way and you'll trigger commands like 'finder the nearest petrol station', for example.

Sony said the new Nav-Us also support Bluetooth for hands-free calling. The NV-U80 contains 512MB of Flash storage and will ship with one of a range of single-territory maps. The NV-U81T has a 4GB hard drive on which Europe-wide maps are pre-installed. It also bundles a Traffic Message Channel subscription, something that's an optional extra with the NV-U80.

Both machines will ship in November. Sony did not disclose pricing. ®