K5 player due next month

IFA 06 Samsung is to take the digital music fight to Apple by launching its own song download service in the UK, France and Germany, the South Korean giant revealed today. Details of the service remain scarce, but we can say it will be operated by digital music distributor MusicNet, which also powers Virgin Digital, HMV, Yahoo!, iMesh and others.

Samsung is typing the debut if the download service into the arrival of its YP-K5 digital music player, which is getting its first public showing at the IFA consumer electronics expo in Berlin today. The YP-K5 is fitted with up to 4GB of Flash memory and plays the usual array of audio formats, along with Linux-friendly Ogg files. There's an FM radio on board too, and the player features Samsung's 3D audio Digital Natural Sound engine (DNSe) for "full basses and a full sound". 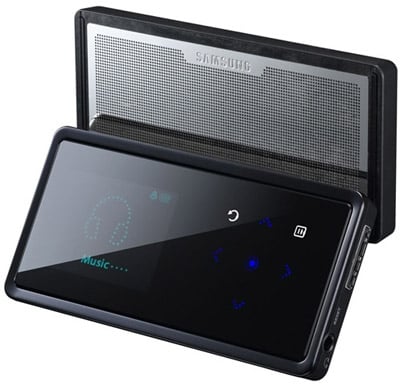 Samsung said it plans to expand the service throughout Europe and Asia once the initial launch phase is completed. When that might be, it didn't say. The service will debut "later this year". Samsung didn't reveal what music format its service will use, but it will almost certainly be Windows Media. Whether the downloads will be specifically tagged to play only on the K5, again Samsung didn't say.

The company's move puts it up against not only Apple but also Microsoft, now the software giant is developing an own-brand player, the Zune, and a digital content service to go with it. ®