IFA 06 LG has presented its upcoming 'super 3G' clamshell handset - a slimline phone that may ship as part of the company's Chocolate line - at a sneak peek event it the IFA consumer electronics show in Berlin.

The U830 is a very thin clamshell model with HSDPA support. It may well be Chocolate-branded by the time it arrives in stores later this year and it should be available on the 3 network in the UK. It features a two megapixel camera, a whopping 200MB of memory, support for various media formats such as MP3, AAC and WMA to mention a few, and it does of course have Bluetooth as well.

LG also showed off its DVB-H handset, which is already on sale in Italy. I have to say that the picture quality was excellent. I had my doubts about how good DVB-H was going to look, but if the demo lives up to what's on offer, DVB-H may entice a wide range of followers. 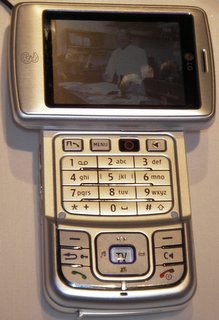 LG also showed a wide range of it's Korean models with all sorts of crazy designs and features, but sadly none of these devices will be available outside of Korea. ®