How to run the 'other' operating system...

With XP running, I tried installing ATI's Radeon Mobility X1600 drivers, but when the installer inspected the hardware configuration as presented by the VM, it decided my machine was not one supported by ATI. As it stands, Parallels' own video driver will not do 3D acceleration. The 3DMark 06 benchmark would not run, and neither would the 3D components of PCMark 05 so I couldn't get a full PCMark rating. For what it's worth, the CPU test yielded a score of 2,891 while the HDD benchmark results was 4,943 points.

You'd want to install the latest ATI drivers to maximise your machine's graphics performance under XP. But there are other limits. Even though XP correctly identifies the host processor, PD limits the guest OS to one of the Core Duo's two cores. In practice, XP and OS X both throttle back apps that are running but sitting in the background, so this is unlikely to hit mainstream applications hard, but it will hinder processor-hungry tools like Photoshop.

You can assign as much memory to the VM as you have physical memory on board, but PD suggests you leave enough for the host OS to run smoothly, and provides a recommendation. My MacBook Pro has 1.5GB, and I assigned the recommended maximum of 1.1GB to the VM, and there was a marked impact on Mac OS X performance. Even running the VM at 768MB, allocated all but 16MB of the physical RAM to other tasks, and that's with just Mac OS X, a handful of dashboard widgets, Activity Monitor and text editor, Text Wrangler, running alongside PD. Switch off PD, and the free memory shot up to 970MB.

Depending on what you plan to run under PD, then a memory upgrade may be in order, which adds to the product's overall cost, of course. 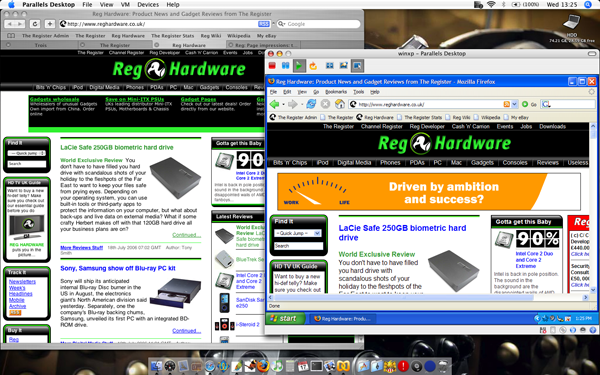 There are other issues. Parallels' routines for changing to full-screen mode needs some work. Out of the box, it messes around with the two OS' resolutions too much. Fortunately, you can tell PD not to change the Mac OS X screen resolution, and you can turn off the transition effects, but I repeatedly saw graphical oddities in XP - missing UI elements, wrong resolution messages and so on. There's no way, it seems, to flip seamlessly from full-screen Windows to full-screen Mac OS X as if you were sharing a monitor between two machines.

Even in full-screen mode, the VM essentially runs in a Window. That's handy in some ways - Apple's volume and brightness controls continue to work as before - but irritating on others, primarily the way Exposé's hot corners are retained. Push your mouse too far and suddenly Windows disappears entirely. 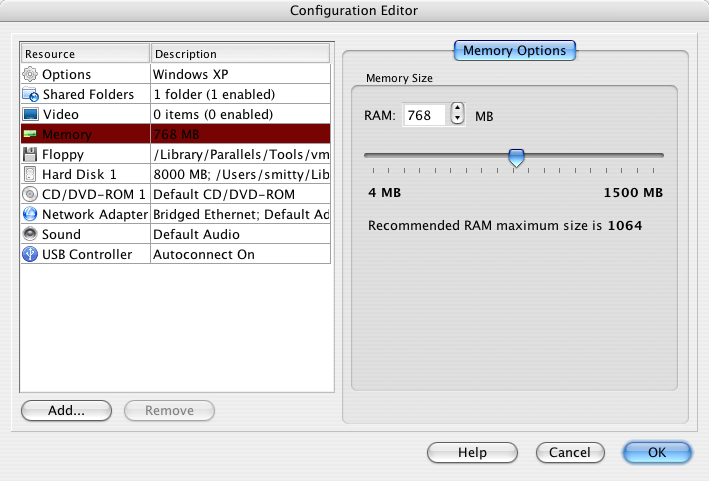 These are minor irritations and easily avoided. And they're a small price to pay for the flexibility of not having to reboot your Mac to change operating systems, or to be able to run multiple operating systems without having to re-partition your hard drive, with the risks that entails. Equally important is PD's ability to with other operating systems than Windows XP - which is all Apple's BootCamp officially supports. That makes PD the only choice for legacy operating systems, such as Windows 3.11. It also provides an easy way to trial Linux.

Parallels Desktop for Mac costs $80, but you may need to add some extra memory too and the cost of a copy of Windows. Fortunately, Parallels lets you try the software out for 15 days, which should give you a sense of the performance limitations and/or expanded memory requirements your chosen guest operating system(s) will require if you choose to stick with PD.