Letters The mystery Chinese military installation near the village of Huangyangtan this week provoked a bit of a speculationfest among El Reg Google Earth aficionados: 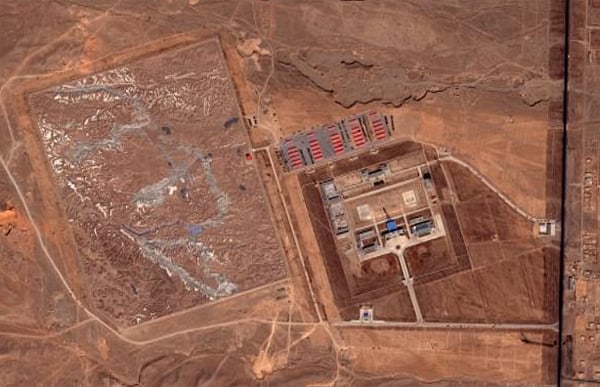 So, just what is this remarkable scale model for? Let's consider some possibilities:

I think you will find that it is used to help train remote pilots of UAVs, the pilotless recon planes. in the UK we actually use computer generated landscapes that are fed back to the pilot via a monitor, it would appear that our friends abroad are using actual modelled landscape, which is more realistic especially when simulating turbulence, etc. Most excellent find though it does amaze me that people have so much time on their hands to find these things. :o)

Before computer graphics were up to the job, commercial pilots in Western countries were sometimes trained on simulators that worked by having a TV camera attached to a monitor in the "cockpit" zoom around a model landscape according to how the pilot operated the controls. Once computers became good enough though they abandoned this completely.

It's difficult to imagine why the Chinese would go to all the trouble of recreating a landscape in miniature when it would be far cheaper and more flexible to do so in a computer (even small fairgrounds often have flight simulator rides nowadays!).

I was discussing this with a "Friend", his take on it is that it is almost certainly used to test "airborne optics". ie Spy Sats, and or high altitude aircraft.

Since it's a scale model, and you can get in very closely and look at the detail on the ground to correlate with what the airborne snapshots show you, it will also assist with the interpretation of images of the real thing...

Not much point for training the Black Chopper pilots with, as a VR simulation will do a much better job without tipping your hand. This installation is designed to be seen from space.. Which co-incidentally is how people found it...

A training aid, almost certainly, but I doubt it's for helicopters. The altitudes in the region this represents make helicopter operations rather difficult. My guess would be that it's a large scale 'sandbox' used for running wargames to help train operational level commanders and their headquarters.

hi lester; neat article. i bet that mountain terrain in miniature was actually designed to cover up some kind of factory or military building that sits below it. that is to say, all that stuff is sitting on top of the roof of a big building. they probably think it makes it harder for enemy bombers to hit during combat, and might help shield it from cursory inspection of satellite photos. this is not an uncommon thing, i know it was done in the u.s. during the second world war and i'm sure it was done in other countries as well. i wouldnt be surprised that people still do this today. neat to look at, though. google maps are a blast. i wonder if kim jong il realizes that you can get almost as close a look at pyongyang from google maps as you could if you lived there? but humorously enough even though you can peek into the furthest corner of pyongyang, the resolution for my boring midwest town is totally lousy. whatever. i guess i already know what it looks like here. anyway, i dig the column. -S

This is amazing all by itself but a "rogue thought" just struck me. What purpose could there be in constructing a miniature topographical terrain set of this size and accuracy? I'd like to compare this with some photos taken "from space" by Chinese satellites or astronauts. The people that think the US faked the moon shots are cranks, but it is conceivable that China faked some space "successes" while they were trying to play catch-up and prove to the world the superiority of Marxism-Lenninism-Englesism-Stalinism-Maoism Possibly they did this in the early years even if later trials succeeded.

That's the purely military options. Of course, there may be a less sinister alternative:

Looks to be a river system in the area ... maybe they are modelling water flows etc in the same way as US Engineers do/did for the Sacramento Delta/SF Bay in the "Bay model" in Sausalito.

A possibility is that this is a hydrological model. Look at http://www.baymodel.org/history/bmvc.html for what has been done before.

It looks like a 'hoover' dam simulator to me. Where they can test out the locations for some electricity dams on a small scale.

Mystery military project wows the crowd: my guess is it might be a scale model of an area under plans to be dammed. Could the grey areas indicate the flood areas?

Yes, the hydrological model idea holds a certain amount of water, as it were...

...and here's another environmental suggestion:

Hi there, I don't normally jump onto news stories but yours grabbed my attention for some reason. Possibly the fact that it's 200 degrees in this office today and i feel like doing very little in the way of manual exercise!

the link attached is of a rather non noteworthy item from the china press. As far as their story goes they intend to do a large amount of forestry in order to stop the desert creeping into a heavily populated area. At first i thought this map might just scale model of the work due to be undertaken in that area. Also the maths don't quite work. In your story you quote 450 X 350 kilmetres which by my maths makes about 15 million square meters. The area they quote is 666.7 hectares (lets not even mention the beast) which is only about 6 million square meters....well short. If it is just a large scale map of the area to be developed then inside or close to a military base is an ideal place for it. I'm sure that amount of materials are quite valuble in that ecomomic area and the chances it being stolen (in part and for the parts) are quite high. However the question still begs....why so big? Surely planting a few trees doesn't warrent a model that large!

We had quite a few emails on this, including the following rather rude missive:

It took little more than 30 seconds for me to find the answer to this "mystery" - and it took no more than typing a single word (Huangyangtan) into Google to solve it.

A little research on young Lester's part, rather than the following of blogs, and rants etc etc, would have revealed a very interesting SCIENTIFIC topic. Instead, you have turned the story into a rumor worthy of the National Enquirer. I expect more than that from you guys. If I want rumour and innuendo, I'll go on over to Digg, and see what the smelly masses have to say...

Right, let's consider the facts here: Beijing has rather wisely decided to plant lots and lots of trees and grass in the Huangyangtan area in an attempt to stop the desertification which is contributing to huge dust clouds menacing Chinese cities.

As part of that process, it's decided to build a huge model of a disputed area quite some distance away on the China/India border. Right, gotcha...

So, while Mr Daley pushes off to Digg and leaves us in peace, let's have a few more suggestions which - while not entirely serious - are at least as plausible as the idea that Beijing's citizens can breathe more easily as a result of a 900x700m landscape model.

1. It could be for testing equipment for use on other planets (eg. Mars landers), athough this wouldn't explain why they copied some terrestrial land. 2. Perhaps the PRC has developed a range of miniature robotic super-soldiers and is testing them out before building full-size ones? 3. Maybe it's to confuse the Google Earth fanatics :P? 4. They might be trying to buil a geographic fractal - no matter how much you magnify, it always looks as if it is at the same scale. This would be spooky... 5. Finally, the Chinese president may enjoy a spot of Airfix modeling and could have constructed this as miniature battle zone in which to carry out his plastic fantasies.

Surely it's a piece of Art? Similar to the Boyle family http://www.boylefamily.co.uk/boyle/index.html who meticulously reproduce semi random pieces of ground. Admittedly this is on a huge scale, but if you have enough people...why not.

Are you sure it's not just the Chinese equivalent of this...? http://www.bekonscot.com/

Yes, but where are the charming windmill and the rose-clad country cottage? We don't think the tourists will be flocking to the Huangyangtan Maoist Model Village.

Personally I think the Chinese are building the worlds largest model railroad. Who knew that Hu Jintao was such a hobbyist? Seems that we have caught them in between laying the terrain and adding the track and foliage. Check back in a few months to see the little trains running and a smiling Hu;)

Well, we'll leave it to you to decide which of the above is the most plausible. And while you're travelling Google Earth, keep an eye out for Bert Ofnuts, who fell mysteriously silent right after sending this email:

Now I understand why Google has invested billions in Google Earth. Remember Stardust@Home? Google Earth is nothing more than an undercover Intelligence@Home project. By uncovering this kind of stuff, people are doing to the work of the CIA... what is that noise? an helic... ®