NASA last week announced that its next generation of crew and cargo launch vehicles will be dubbed Ares I and Ares V, respectively.

The Ares bit of of the title was inspired by a "pseudonym for Mars", according to associate administrator for NASA's Exploration Systems Mission Directorate, Scott Horowitz. The "I" and "V" designations "pay homage to the Apollo program's Saturn I and Saturn V rockets".

The concisely job-titled Horowitz trumpeted: "We honour the past with the number designations and salute the future with a name that resonates with NASA's exploration mission." 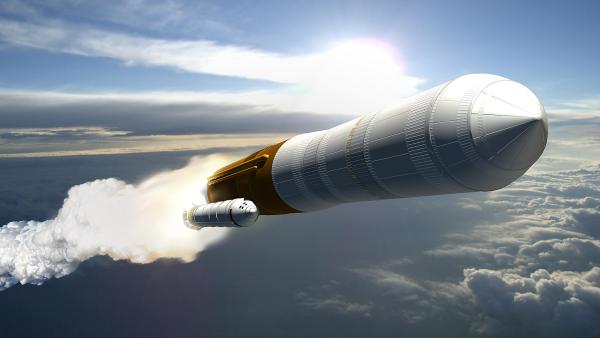 The crew exploration vehicle, which will succeed the space shuttle as NASA's spacecraft for human space exploration, will be named later. This vehicle will be carried into space by Ares I, which uses a single five-segment solid rocket booster, a derivative of the space shuttle's solid rocket booster, for the first stage. A liquid oxygen/liquid hydrogen J-2X engine derived from the J-2 engine used on Apollo's second stage will power the crew exploration vehicle's second stage. The Ares I can lift more than 55,000 pounds to low Earth orbit.

Ares V, a heavy lift launch vehicle, will use five RS-68 liquid oxygen/liquid hydrogen engines mounted below a larger version of the space shuttle's external tank, and two five-segment solid propellant rocket boosters for the first stage. The upper stage will use the same J-2X engine as the Ares I. The Ares V can lift more than 286,000 pounds to low Earth orbit and stands approximately 360 feet tall. This versatile system will be used to carry cargo and the components into orbit needed to go to the moon and later to Mars.

NASA's optimism for the programme actually extends beyond the Red Planet. The press release blasts off by promising that the two Ares' are the "next generation of launch vehicles that will return humans to the Moon and later take them to Mars and other destinations".

There's more on the Ares I and V here and here. Click here for further info on NASA's "Vision for Space Exploration". ®