What a bunch of flankers 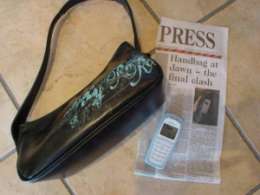 Bidding has spiralled out of control on New Zealand auction website Trademe.co.nz as punters scramble for the now famous handbag used by ex-All Black captain Tana Umaga to reprimand Chris Masoe in a Christchurch bar in the wee hours of Sunday morning.

The auction, posted last Friday by the entrepreneurial owner of the fashion accessory, has reached outrageous heights, and at time of publication had attracted 518 bids, the highest of which exceeds NZ$100m (£33.9m).

Umaga took action after his Hurricanes team-mate punched another drinker who he thought had tripped him over. He then reportedly picked up a woman's handbag and hit Masoe in the head with enough force to smash a cellphone inside the bag.

Masoe, who forms part of the tough "Devil's Henchmen" loose trio in the Hurricanes, allegedly burst into tears and fled from the bar after the handbag assault.

Independent Online reports that the 22-year-old owner of the handbag told The Christchurch Press: "I mean a handbag, of all things. How hilarious...he hit him pretty hard. We heard it across the bar. He cracked him up the side of the head twice."

Earlier that day, the Hurricanes were beaten 19-12 by the Crusaders in the inaugural Super 14 Final.

The New Zealand Rugby Union fined Masoe NZ$3,000. No charges were laid against Umaga, but he did replace the woman's mobile phone.

The auction carries the following description:

"These are the genuine articles. Handbag was used by Tana Umaga to hit Chris Masoe at the Jolly Poacher in Christchurch after the Super 14 final. Cellphone that was broken in this bar incident is also included. This can be verified as the genuine articles at time of purchase. Please note this has been listed on owners behalf.

In typical Friday fashion, questions have been coming in thick and fast from bidders, and include: Does this come with Masoes girls blouse? Is there any blood on the handbag? Is there any guarantee that hitting someone with this will make them cry? and, Can you throw in a vial of Chris Masoe's tears that were shed that night?

Another victim of the disturbing trend of handbag abuse, asked: "My wife tends to hit me with her handbag too....you think I could sell this one too to pay for my new glasses?"

But as bidding continues to reach bizarre heights, some watching the auction are concerned about the validity of the bids. Luckily for the seller, she was offered the services of this helpful lawyer: "If your top bidder does not front up with the said amount (even if it's 100+ million) I would be more than happy to provide free from all costs litigation proceedings to ensure the bankruptcy of the person/s responsible. I do this to people on a daily basis, and would much enjoy helping you destroy the fake bidders financial freedom for the next three years. Superb once-in-a-lifetime opportunity, it's a real shame you have idiots ruining it."

Comment Just what is Patrick Byrne's role in the Deep State? He's here to tell you