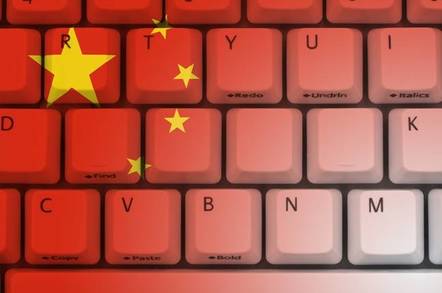 Google announced the transfer of 140m shares of Class B stock to a new entity owned by the Chinese Ministry of Information in typically forthright style.  The news was disclosed in a Captcha graphic on its Google Canteen Menu weblog; investors had to click a hidden link to see the announcement, and then decode a stenographically-hidden message watermarked into the JPG file. Once decrypted, the message read:

gee it's raining here in mountain view and my cats hungry so we thought we'd better update you on our corporate finances. we've sold out to china. have a great weekend boo-yah!! lol

No other details were forthcoming.

Amongst the assets acquired by the Chinese government is NASA's Ames Research Center. Google announced a partnership with Ames last year, and, as it turns out, the move laid the groundwork for the takeover by the PRC. The Chinese will gain control of the world's largest wind tunnels - devices that when opened up could be used to push the smell of Mu Shu Pork across much of Silicon Valley, or conversely be used to spread avian bird flu, or mind-altering substances.

Ministry of Information officials were conducting examinations at the Ames facility today, and requested rush hour traffic on the adjacent Highway 101 be re-routed. Caltrans officials agreed to the request.

President Bush uses Ames as his landing pad for Northern California visits and is expected to do so under the Chinese ownership.

"The Chinese make the blankets, headphones, chopsticks, stereos and tires on Air Force One," said White House spokesman, Scott McLellan. "I don't see why they can't land the damn thing too."

How we didn't break the news

It was a picture taken by a Register reader from inside the Chinese Propaganda Ministry six months ago that prompted our investigation. The shot appeared to show Government artists harnessing the youthful charisma of Google's founders for a productivity campaign.

Only when we saw further evidence of the artwork did the penny drop. Google's founders have reciprocated the gesture, and as this photograph ahead of today's official announcement shows, they are making extraordinary efforts to have the company's new management feel at home.

The cosmetic surgeon who supplied the evidence confirmed the operations had been successful.

Our investigations suggest that Google has been working on behalf of the People's Republic for many years. Its activities include collecting data on US citizens - Google recently fought a US government request to hand over its data in the courts - and owning key parts of the nation's communications infrastructure.

In fact, security analysts who've seen the evidence suggest that Google is little more than a PRC front organization.

Behind the colored balls

The roots of the Google/China conspiracy can be traced back to Sergey Brin's father Michael Brin. The Russian-born mathematician grew disaffected with the USSR's brand of communism and joined an elite task force of communist China sympathizers operating out of Moscow. Members of the organization - Chinuks - would pass messages to each other inside of plastic, colored balls. Their shared mission was to revive a purer Maoist form of Communism in China, and they planned to aid the country through technology advances.

Sergey grew up learning the ways of the Chinuks and from an early age committed himself to bringing Michael's dreams to fruition.

A team of Chinuks worked with Sergey for fifteen years to create a search algorithm powerful enough to attract hundreds of millions of people to their product. The Chinuks and Brin managed to convince Stanford, and later German Andy Bechtolsheim, to fund their efforts. The group also handpicked Larry Page as an American patsy to distract attention away from their dark ambitions, and then cemented the masquerade by hiring a retired teacher, Eric Schmidt.

Until early this week, Schmidt had no idea he was fronting a data gathering operation for a foreign power, and had told friends and family he was supervising an after hours therapy center for local children suffering from Asperger's Syndrome.

Billions of dollars and a steady supply of crayons have kept Page and Schmidt quiet.

In peril: Our Nation's Youth

The Register's investigation has turned up evidence that Google has been feeding data on US citizens to China for years. But more disturbingly, psychological experts and economists are concerned that Google's enthusiasm for addictive and distracting technologies such as "Web 2.0" will fatally sap US productivity for years to come.

"It's the Opium Wars in reverse," said one former national security adviser, speaking under condition of anonymity.

The deal also compromises the United States' lead in the strategically vital areas of blogging software, AJAX-powered PowerPoint clones, and dysfunctional video services of cats falling out of trees.

Even Google's Maps has not escaped the PRC-initiated makeover. International policy relations experts tonight expressed concern about some of the changes: [Thanks to Splinter Products for the shots from inside the Chinese Propanda Ministry, and inside the Sergeyry.]

'Why is this article still on the site?' asks 12-sided muppet

In the cooler for the next three years: Hacker of iCloud accounts used by athletes and rappers