Walkers, if you must know 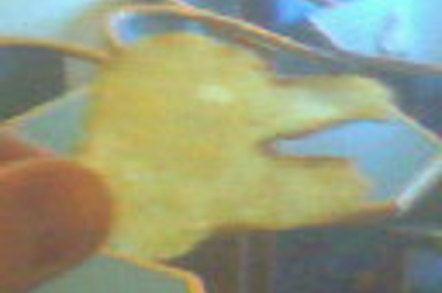 First it was Christ on a crisp, then it was the Virgin Mary on a slice of toast. Now, making it a decidedly unholy Trinity, El Reg vulture log has surfaced in the wild, snack-size.

We are indebted to Aidan Lynch for the following contribution:

My brother, John, recently bought a bag of salt & vinegar Walkers crisps here in Dublin. One of the crisps resembled the head of a bird, so he took a photo with his phone.

However, not being a reader of The Register, he failed to realise the significance of his find. But as you can see from the attachment, this is not just any old bird-head-shaped crisp! The vulture has its mouth open, perhaps ready to pounce on a pigopolist.

P.S. John ended up scoffing the crisp like the fat bastard he is. Otherwise I would've taken a better photo.

If John had been a grasping bastard, he could have sold this simulacrum – alas extinct – to GoldenPalace.com, which collects such things. John reminds us of those Thai fisherman, who caught the world’s biggest catfish, the size of a grizzly bear and very rare. And ate it. Thanks, John.

So why the vulture?

Our logo is the brainchild of Reg co-founder John Lettice. Many years ago - 1995, or 1996 - The Register produced a small newsletter to dole out at CeBIT. John says he chose the vulture for the masthead as an ironic take on the eagle used so often on newspapers. We think it was because his clipart CD didn't have an eagle. Any which way, the masthead below was adopted for our first run at the web, a fortnightly newsletter, in January 1997.

Our next vulture was produced by a freelance designer from Teddington called Fraser. We had that for about a year.

Our current vulture made its debut in August 1998. It was designed by Jim Morgan at Third Wave, a design agency in Birmingham. Apparently, it is a representation of the smallest African vulture - whose name we forget. ®

Brain plague or estate agents? I know which I'd prefer in Virtual Reality

Utopian dreams of the concept's creators blur into crappy reality

Time for a brutal TELLY-OFF: Android TV versus Firefox OS

Breaking Fad The fight for the living room's future is on

'He meant more to us than Jesus'

Steel simulacrum yours for $2k+