My PC is older than yours 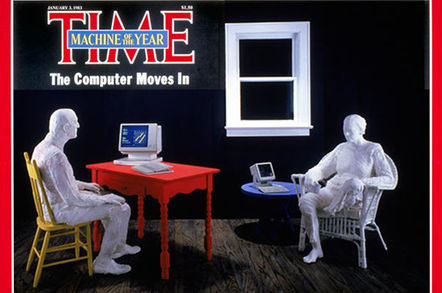 Letters The story about the oldest working in the Netherlands, a vintage IBM 5160 (Intel 8088) computer from 1983, which is still being used to test matrix printers, attracted a fair amount of comments. We asked you if you knew about other old desktops still chugging away somewhere. And many of you responsed. So what else is old and still alive?

"How about a Sun 3/60 from 1988 still connected to the Internet?' Pete wrote to us. And the machine isn't sitting idle either, it hosts a web site (sorry, we are not allowed to give you the URL).

The Canadian Grain Commission still has a couple of Apple IIcs in use from the mid-80s.

A couple of readers mentioned good old BBC Micros (1980). They are still in use with some UK universities. Jodrell Bank, the radio astronomy observatory in the UK, uses a BBC micro from the early 1980s to steer one of their smaller dishes which tracks a pulsar in the Crab nebula.

The City of New York may still have an IBM 1440 somewhere, one reader informed us: "I believe that it's processing some form of punch card time sheet." Rumors of a tube computer at the Big Apple, we were told, are untrue.

We were also informed about Dallas band TreeWave, which performs on two Commodore 64s, an Atari 2600, and an old Compaq luggable. The brains behind Treewave have also programmed Epson assembly language to use a dot-matrix printer as an instrument.

"My Dad still uses his old Xerox CP/M (from '79 or '80, I think). 8-bit computing! It can calculate amortization pretty darn fast."

"My ZX-81 makes a great paperweight." OK, a working computer too. Sort of. But it can't beat a "ten grand cluster that serves as a room coffee table after redundancies left upgrade projects on hold".

Another reader says he still owns a Compaq Portable II machine with a date stamp of October 1986. Although it is of the same size as an old sewing machine, it still works fine.

"How about running a competition for finding the newest non working PC?" one reader suggests. Too many of those, we're afraid. ®