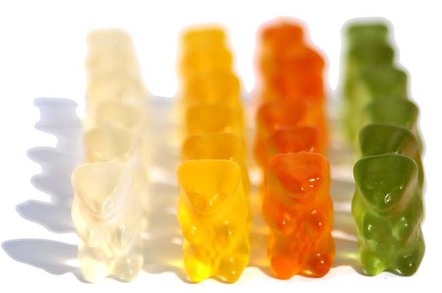 A Japanese cryptographer has demonstrated how fingerprint recognition devices can be fooled using a combination of low cunning, cheap kitchen supplies and a digital camera.

First Tsutomu Matsumoto used gelatine (as found in Gummi Bears and other sweets) and a plastic mould to create a fake finger, which he found fooled fingerprint detectors four times out of five.

Flushed with his success, he took latent fingerprints from a glass, which he enhanced with a cyanoacrylate adhesive (super-glue fumes) and photographed with a digital camera. Using PhotoShop, he improved the contrast of the image and printed the fingerprint onto a transparency sheet.

Matsumoto took a photo-sensitive printed-circuit board (which can be found in many electronic hobby shops) and used the fingerprint transparency to etch the fingerprint into the copper.

From this he made a gelatine finger using the print on the PCB, using the same process as before. Again this fooled fingerprint detectors about 80 per cent of the time.

Fingerprint biometric devices, which attempt to identify people on the basis of their fingerprint, are touted as highly secure and almost impossible to fool but Matsumoto's work calls this comforting notion into question. The equipment he used is neither particularly hi-tech, nor expensive and if Matsumoto can pull off the trick what would corporate espionage boffins be capable of?

Matsumoto tried these attacks against eleven commercially available fingerprint biometric systems, and was able to reliably fool all of them.

"The results are enough to scrap the systems completely, and to send the various fingerprint biometric companies packing," said Schneier in yesterday's edition of his Crypto-Gram newsletter, which first publicised the issue. ®